Should Americans look to Sweden or Germany as a model for combating coronavirus?

Posted on February 5, 2021 by Neev Enterprise Leave a comment 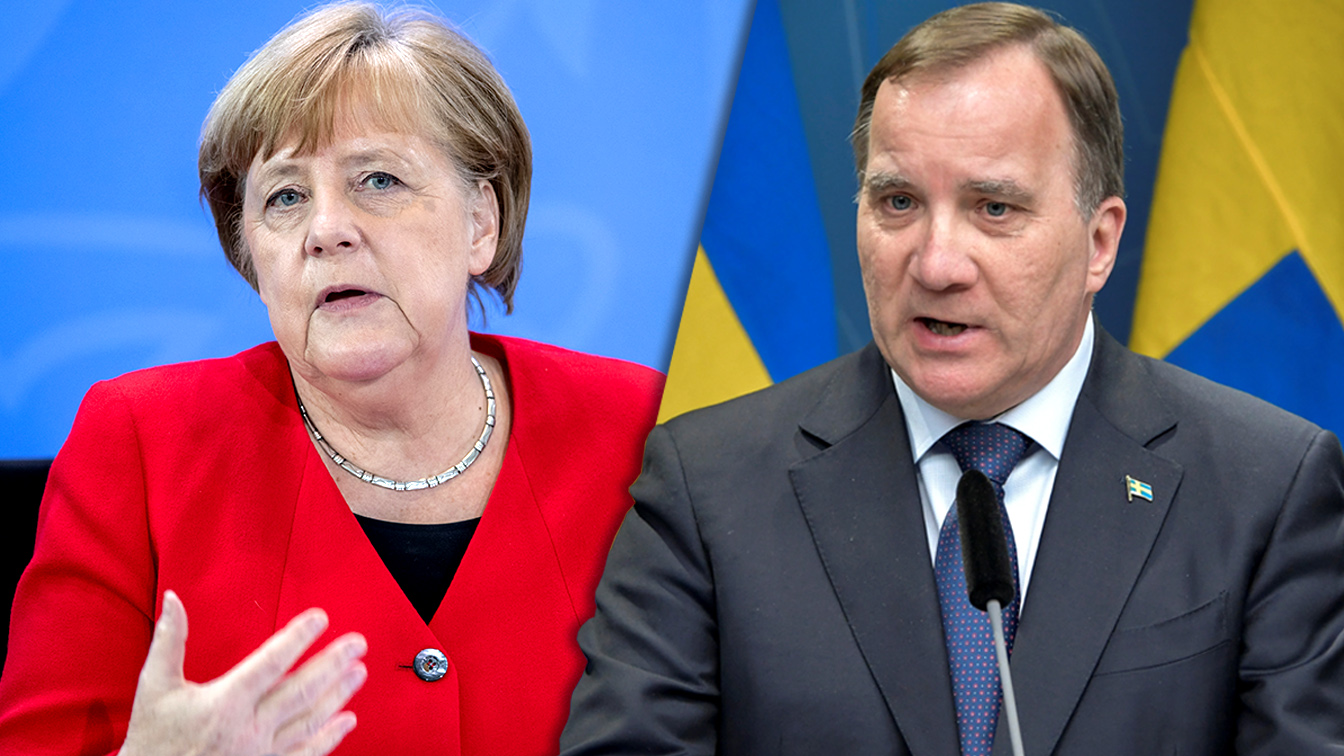 Americans like to think of their nation as exceptional. There’s even a term for it: American exceptionalism.

Every time someone like Bernie Sanders says the United States should pattern its social safety net on Denmark’s, for instance, someone like Hillary Clinton snaps, “We are not Denmark.”

Yet when it comes to the coronavirus pandemic — or, more specifically, how we transition from the state of suspended animation known as “lockdown” into the even more vexing phase known as “reopening” — anxious Americans of all political persuasions have been more than happy to look to foreign countries as potential models.

Recently, two countries in particular have emerged as touchstones: Sweden, for conservatives, and Germany, for liberals.

But would either approach really work in the U.S.?

A May 6 New York Times feature summarizes the German Way as “a combination of cautious, science-led political leadership and a regime of widespread testing, tracing and social distancing.”

The country has enforced strict lockdowns, tested systematically and based policy changes on clear, data-driven metrics such as R0, the effective reproduction rate of the virus as expressed by the estimated number of people one infected person subsequently goes on to infect. As a result, Chancellor Angela Merkel — who has a doctorate in quantum chemistry — proudly announced last week that Germany could “afford a bit of courage” and start to reopen most parts of its economy and society.

Customers wait in line in Munich after the coronavirus lockdown has been eased around the country and companies open some of their stores, May 12. (Andreas Gebert/Reuters)

New daily infections had dropped under 1,000 for the first time in more than six weeks. R0 had fallen to 0.65, well below the threshold of 1.0 that divides a growing outbreak from a shrinking one. Fewer than 7,000 Germans had died — a far lower mortality rate than in most neighboring countries. As a result, shops reopened for business, with restaurants, hotels, classrooms and even pro soccer matches set to come next.

“To many of [President] Trump’s critics,” the Times noted, “the strategy that has won Ms. Merkel praise and Germany a reprieve … is precisely the one the United States should have followed.”

Unless, that is, it should have followed Sweden’s. For months now, conservatives and libertarians have been touting the Swedish way as a corrective to what they see as America’s unnecessarily strict lockdown measures.

“Sweden is fighting coronavirus with common-sense guidelines that are much less economically destructive than the lockdowns in most U.S. states,” wrote T.J. Rodgers, CEO of Cypress Semiconductor Corporation, in an April 26 Wall Street Journal op-ed that was widely circulated in conservative circles.

“Since people over 65 account for about 80% of Covid-19 deaths, Sweden asked only seniors to shelter in place rather than shutting down the rest of the country; and since Sweden had no pediatric deaths, it didn’t shut down elementary and middle schools. Sweden’s containment measures are less onerous than America’s, so it can keep them in place longer to prevent Covid-19 from recurring. Sweden did not shut down stores, restaurants and most businesses.”

Ultimately, Rodgers concluded, Sweden “may prove that many aspects of the U.S. shutdown were mistakes — ineffective but economically devastating — and point the way to correcting them.”

Obviously, the U.S. can’t go back in time. But going forward, it would seem Americans have a choice: Try to be more methodical, like Germany — or loosen up for good, like Sweden.

The correct answer, as with so much else when it comes to the coronavirus, is that it depends. In this case, it depends on what Americans are willing to tolerate: more government, or more death.

Conservatives are right when they say Sweden hasn’t closed schools, stores and restaurants. Even bars and nightclubs remain open, and Stockholm has not ordered Swedes to wear masks or socially distance. But that isn’t the whole story, either. The government has encouraged people to keep their distance, and people have largely complied — a product of Swedes’ unusually high levels of trust in authority.

“We are famous for following the rules,” Katarina Eckerberg, a political science professor at Umeå University, recently told Business Insider. Sweden also provides comprehensive, immediate sick pay, meaning that people who are infected with COVID-19 have no financial incentive to go to work and spread the virus further. And multigenerational households are uncommon, so younger family members tend not to infect their older, more vulnerable relatives.

Even so, Sweden has been forced to accept a lot of death as a consequence of its soft approach. In neighboring Norway, which did lock down, 224 people have died from the coronavirus. In Sweden, that number is 15 times higher: 3,313.

Many of the victims were poor immigrants or seniors in elder-care facilities. Framed as a percentage of the population, Sweden has lost 328 people per million residents — one of the 10 highest death rates in the world. Even the U.S., the undisputed epicenter of the pandemic, has a lower death rate (248 per million). If America’s death rate were as bad as Sweden’s, about 30,000 more Americans — 110,000, total — would be dead right now from the coronavirus.

This loss of life is supposed to be part of a trade-off. Yes, vulnerable people die, the argument goes. But they might have died anyway. In return, Sweden maintains a higher level of economic activity, and as the virus spreads, people acquire immunity. The result: a quicker recovery and more resistance to future outbreaks.

People buy vegetables as fences and information signs are placed to reduce congestion due to the coronavirus in Mollevangstorget, in Malmo, Sweden, April 25. (Johan Nilsson/TT News Agency/ via Reuters)

But those benefits might be a mirage. Why? Because economic demand is down everywhere, and even Swedes aren’t spending like they used to. So while new figures show that in March Sweden performed better than much of Europe — it recorded a decline in gross domestic product of 0.3 percent versus 3.8 percent for the EU as a whole — the country’s central bank now estimates that GDP will contract by 7 percent to 10 percent this year, with unemployment peaking between 9 percent and 10.4 percent.

“It is too early to say that we would do better than others,” Christina Nyman, a former deputy head of monetary policy at Sweden’s central bank, told the Financial Times. “We think Sweden will end up more or less the same.”

At the same time, Stockholm’s top epidemiologist — the scientist behind his country’s soft approach to the pandemic — claims that a quarter of the population has already been infected, which could indicate that a large number of Swedes have developed some immunity to the virus. But given that this would indicate a higher level of prevalence than in New York, which has suffered nearly 10 times as many coronavirus deaths as Sweden, his estimate is probably too optimistic. This suggests, in turn, that Sweden’s case count and death count will continue to climb and that the Swedes aren’t nearly as close to “herd immunity” as they think.

The German approach presents a different challenge. There the death rate is strikingly low: just 91 people per million, compared to 408 per million in neighboring France and 508 per million in neighboring Italy. Yet over the weekend, the Robert Koch Institute — the German equivalent to the Centers for Disease Control and Prevention — announced that R0 (the virus’s reproduction number) had nearly doubled in the three days since the relaxation of lockdown restrictions, surging from 0.65 (which suggested a shrinking epidemic) to 1.1 (which suggests an epidemic that is growing exponentially). An outbreak is only considered under control when R0 falls below 1.0.

“There are signs that the reproduction number is going back up again,” Professor Thomas Hotz of Technische Universität Ilmenau told the Guardian. “If you see how people have started acting in the big cities, it doesn’t completely surprise me.”

The rising infection rate shouldn’t be surprising. In the absence of herd immunity or a vaccine, the virus will spread whenever and wherever people interact. But Germany, as usual, was prepared.

Under a new emergency “snap back” mechanism, hospitals, care homes or entire municipalities revert to lockdown if they cumulatively register more than 50 new infections per 100,000 inhabitants within seven days. The idea is that this localized braking system will eliminate the need for a nationwide lockdown by slowing the spread of COVID-19 before it grows into a second wave.

So far, three German municipalities have breached the new threshold and returned to lockdown: one in the northern state of Schleswig-Holstein, one in eastern Thuringia and one in western North-Rhine Westphalia.

This is smart policy. The question is whether America is disciplined and methodical enough to implement a centrally planned, locally enforced snap-back regime and whether quarantine-weary, liberty-loving Americans would even tolerate it.

So far, the U.S. coronavirus response has been a contradictory patchwork of mixed messaging and undertesting, with each state left largely to its own devices. Meanwhile, according to a new Morning Consult poll, just 36 percent of Americans say they’re still self-quarantining, down from a peak of 55 percent, and 32 percent say they’ve visited family or friends in the past week, the highest share in nearly two months. A full 68 percent say they would not participate in a contact-tracing program established by the federal government — a critical safeguard that Germany already has up and running.

In other words, neither the Swedish nor the German approach seems particularly well-suited to the American predicament. And so the U.S. will likely continue to muddle through the risky process of reopening, with some states steering toward Sweden (only with less obedience and perhaps more dire health consequences) and others trying to emulate Germany (only with less organization and perhaps more public resistance).

At least Americans will continue to do things their own way.

Click here for the latest coronavirus news and updates. According to experts, people over 60 and those who are immunocompromised continue to be the most at risk. If you have questions, please refer to the CDC’s and WHO’s resource guides.