Eerie pictures inside the opulent cinema for sale for £1

Posted on February 22, 2021 by Neev Enterprise Leave a comment

When the New Victoria first opened its doors to the public in the heart of Bradford in 1930, the magnificent Art Deco building was one of the largest cinemas in the country, with an auditorium that could seat 3,000 people.

Featuring a grand ballroom, restaurant and tea room – all in the same lavish style – the landmark building went on to become the thriving hub of entertainment in the industrial city in Yorkshire, screening films from the Golden Age of Hollywood and going on to host The Beatles and The Rolling Stones during the 1960s.

More than 80 years on, pictures from inside the now derelict Bradford Odeon – whose owner has offered to sell it to Bradford City Council for just £1 –  reveal waterlogged carpets in the deserted lobby that was once thronged with people, and damp creeping across the walls of the formerly sumptuous auditorium. 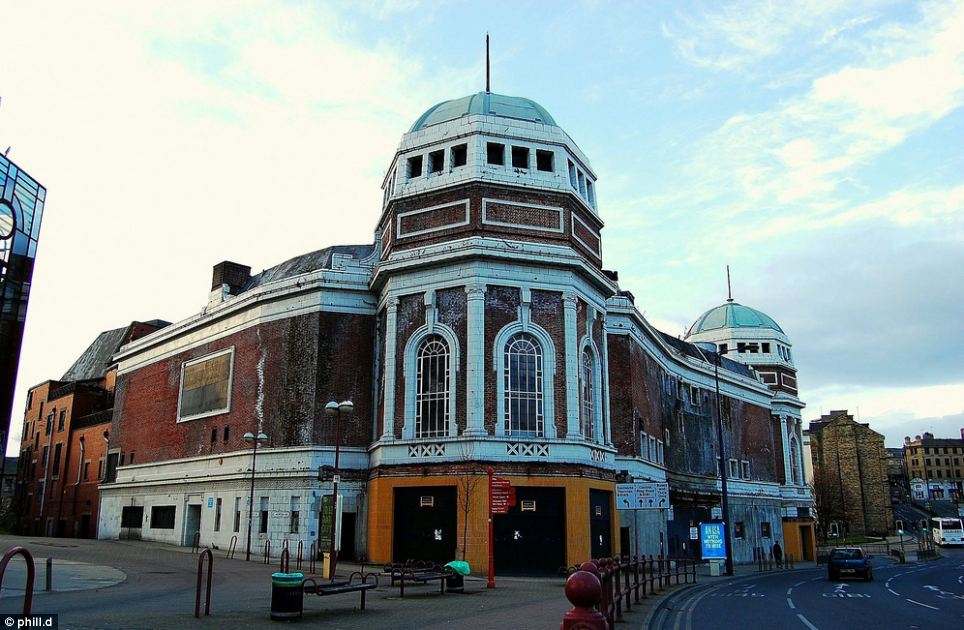 Faded glory: The Bradford Odeon closed its doors for the last time in 2000. The owners of the landmark building have offered to sell it to the council for the nominal fee of £1 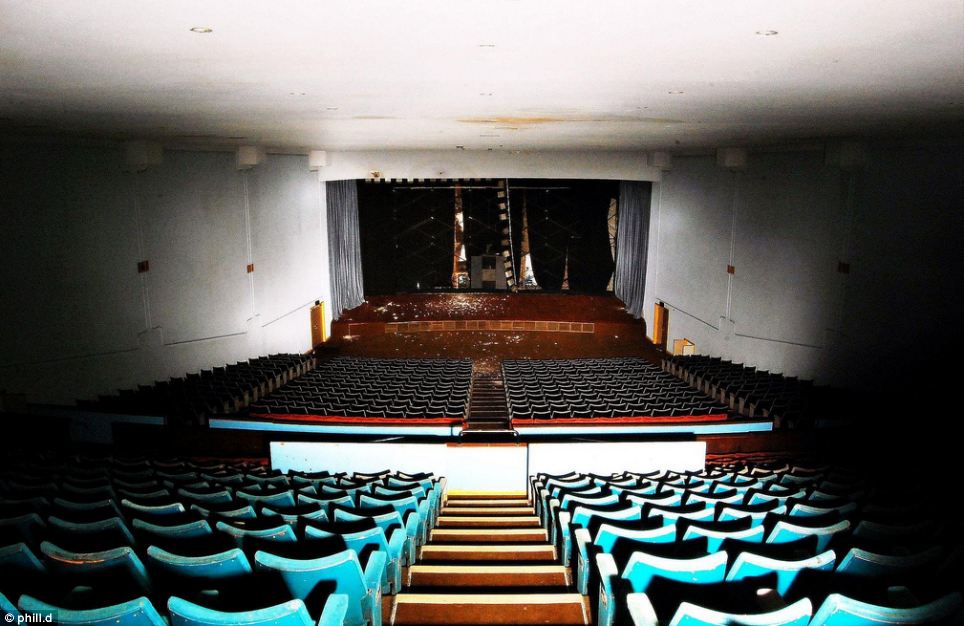 Deserted: Where once the auditorium inside the building would have housed hundreds of people, today it is dilapidated and deserted

A source of huge civic pride in Bradford, the 1930s edifice boasted an imposing exterior and lavishly fitted interior that would have been far removed from the usual surroundings of many of its patrons.

In September 1950 the building was renamed The Gaumont and began hosting concerts and stage shows, welcoming famous names from Billy Haley and The Comets to The Beatles during the 1960s.

While the lofty auditorium and plush lobby drew crowds of film fans and music lovers for a large chunk of the 20th Century, the historic picture house eventually lost its battle with multiplexes luring the city’s young people with the offer of a greater choice of film titles on an array of vast screens.

The venue, by then known as the Bradford Odeon, finally closed its doors to the public in 2000, much to the regret of the local community who over the years had taken the Art Deco building to their hearts.

The cinema has now been deserted for more than a decade, and these photographs, posted on Flickr, reveal the faded glory of the building that was for many years at the heart of Bradford’s social scene. 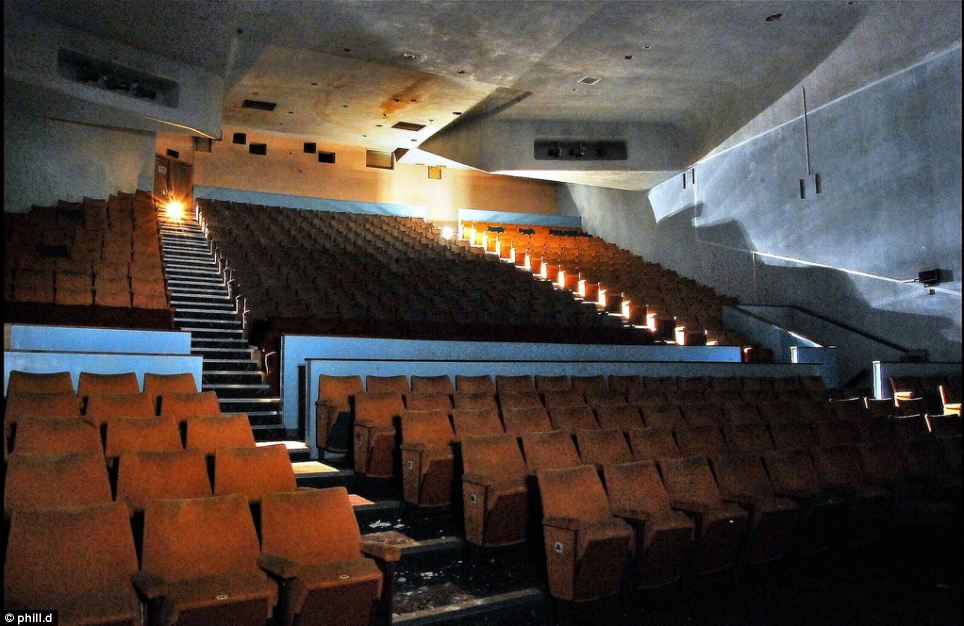 Run down: In its heyday the auditorium in the Bradford cinema could seat more than 3,000 people 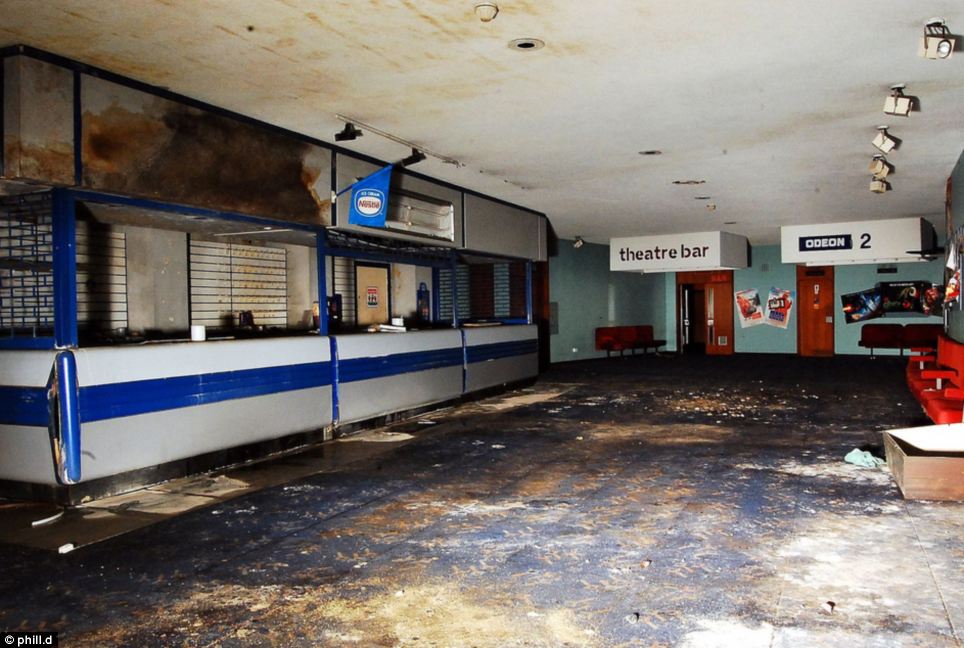 Neglect: The waterlogged carpet in the deserted lobby, which once would have been thronged with people

The Bradford Odeon is owned by the Homes and Community Agency (HCA), which has offered to sell the landmark building to the local authority for the sum of £1.

The HCA made its offer after plans to demolish the Art Deco venue to make way for offices and apartments were scrapped because developers had failed to comply with the terms of its agreement.

The agreement was terminated and discussions are now underway between Bradford City Council and the HCA over the future of the Bradford Odeon.

‘We recently made an offer to the council to purchase the site for the nominal value of £1,’ Naz Parker of the HCA toldBBC News Online.

‘Following the transfer of the building, we would support the council to secure a commercially viable outcome for the site that meets their objectives and those of the people of Bradford,’ he added. 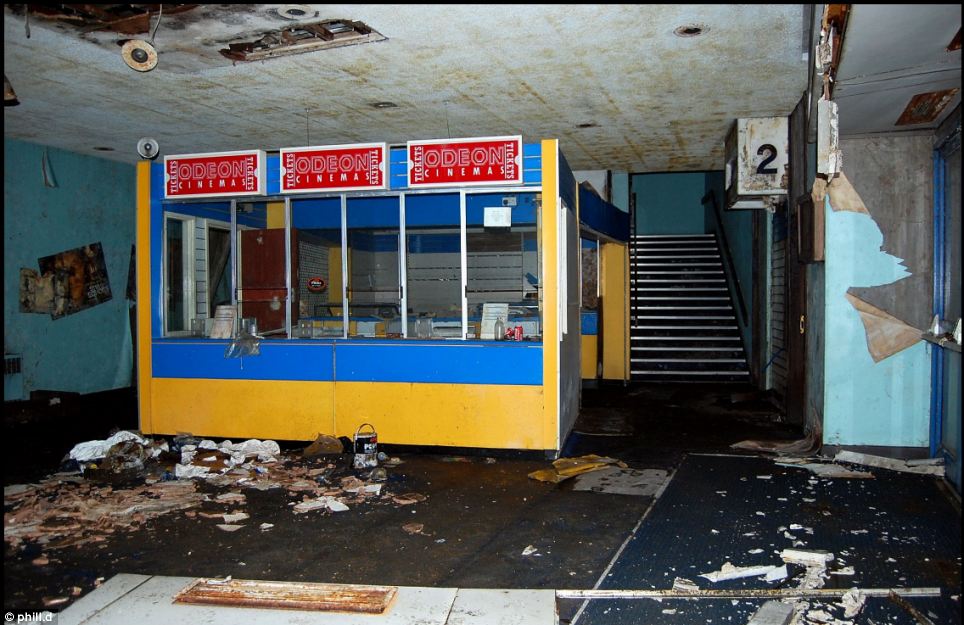 Derelict: Built in 1930, the then New Victoria went on to be renamed The Gaumont in 1950, before becoming the Bradford Odeon in 1969 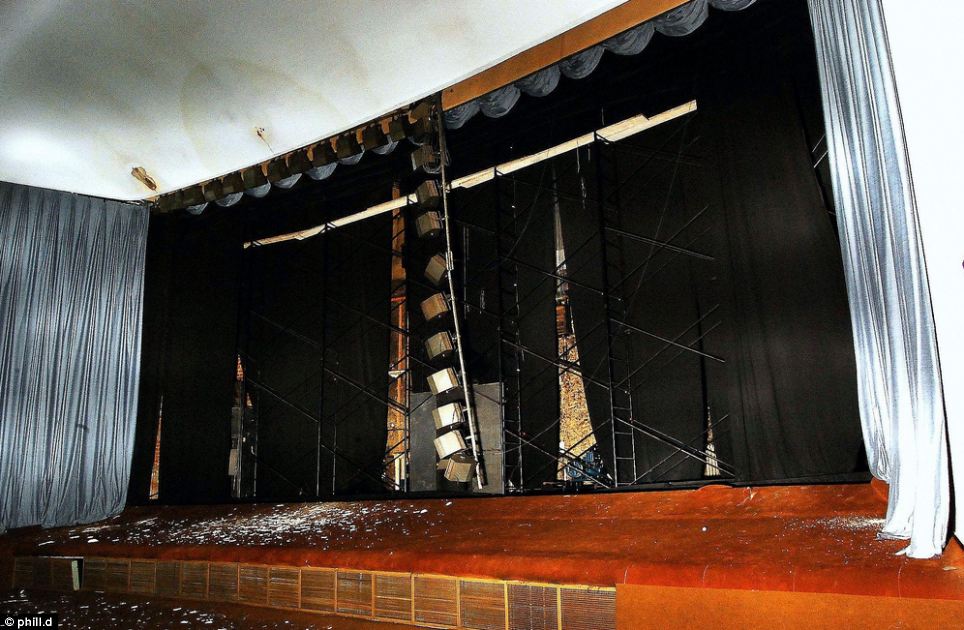 Neglect: Damp is visible on the walls in a crumbling auditorium inside the derelict building on Prince’s Way in Bradford 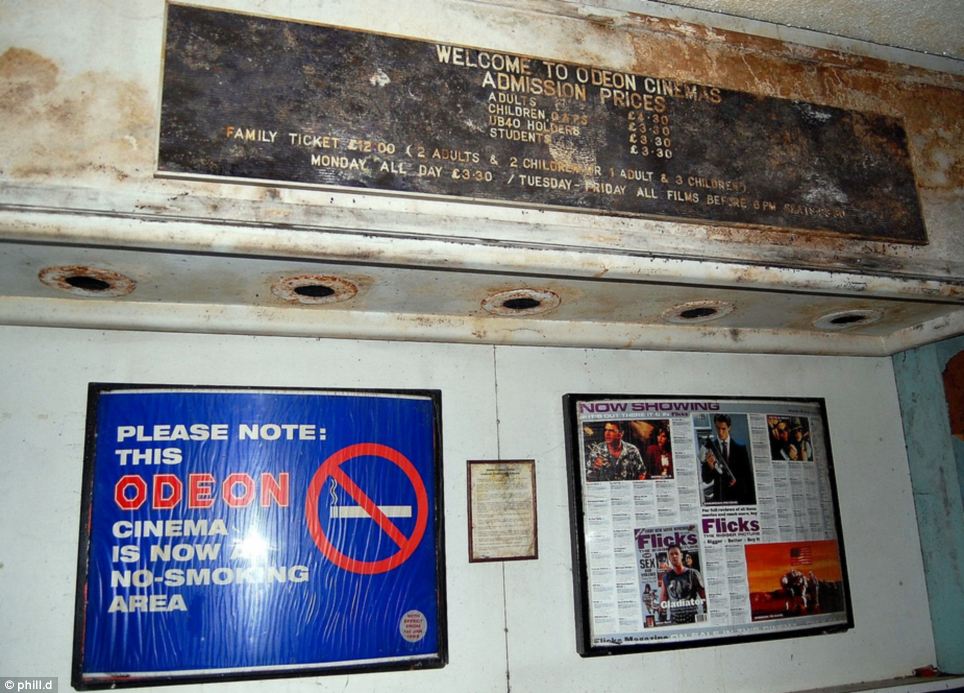 Historic: The admission prices are still visible on a sign at the old cinema, even though it closed its doors to the public back in 2000 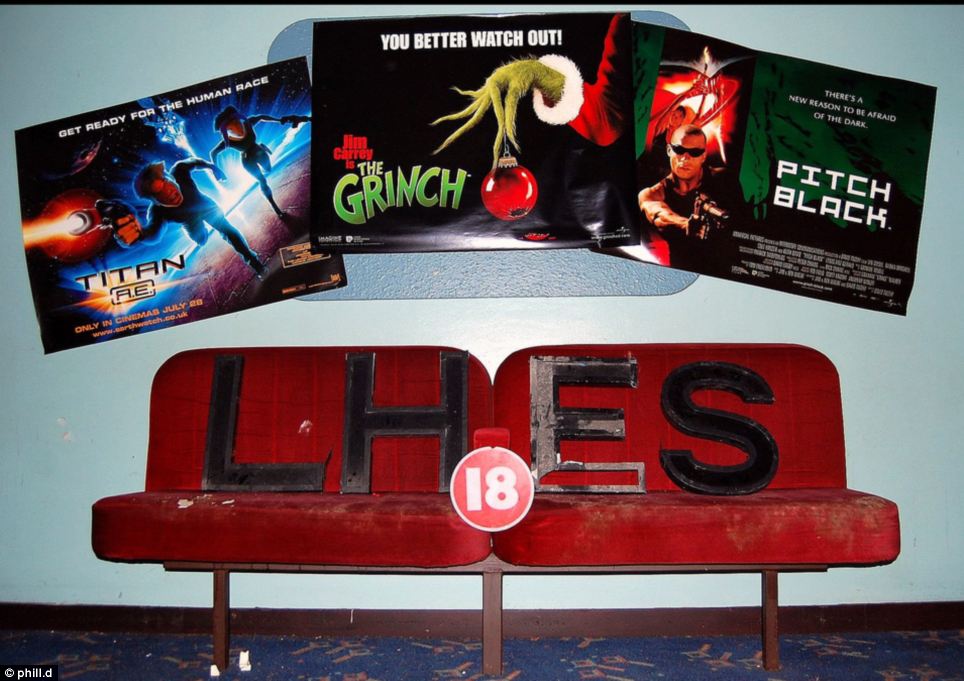 Much-loved: Movie posters still adorn the walls above some seats inside the abandoned building, which the Bradford community is eager to see restored to its former glory 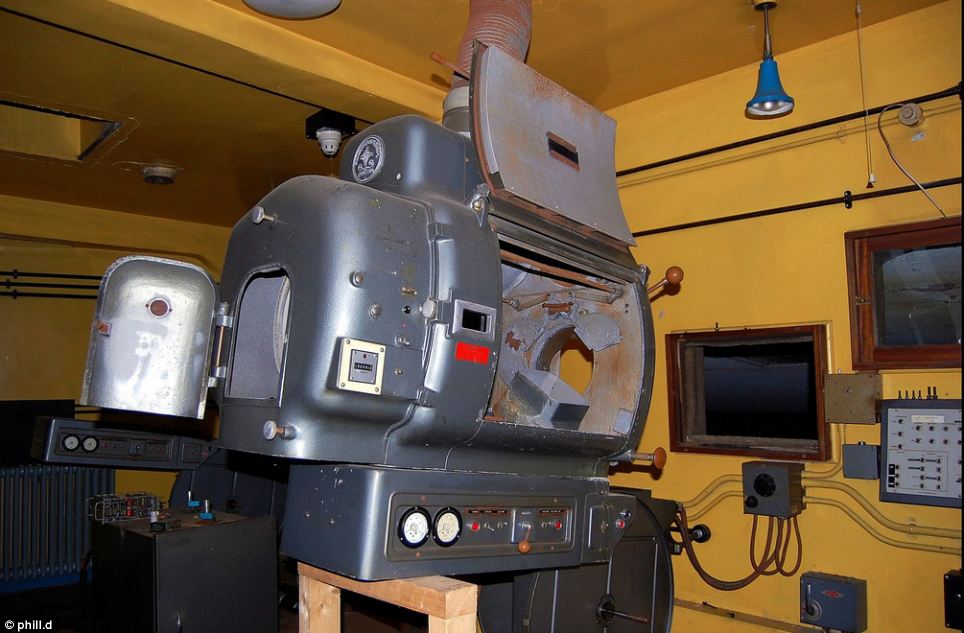 Out of use: A projector at the derelict picture house, where once the people of Bradford flocked to see films from the Golden Age of Hollywood in the 1930s and ’40s 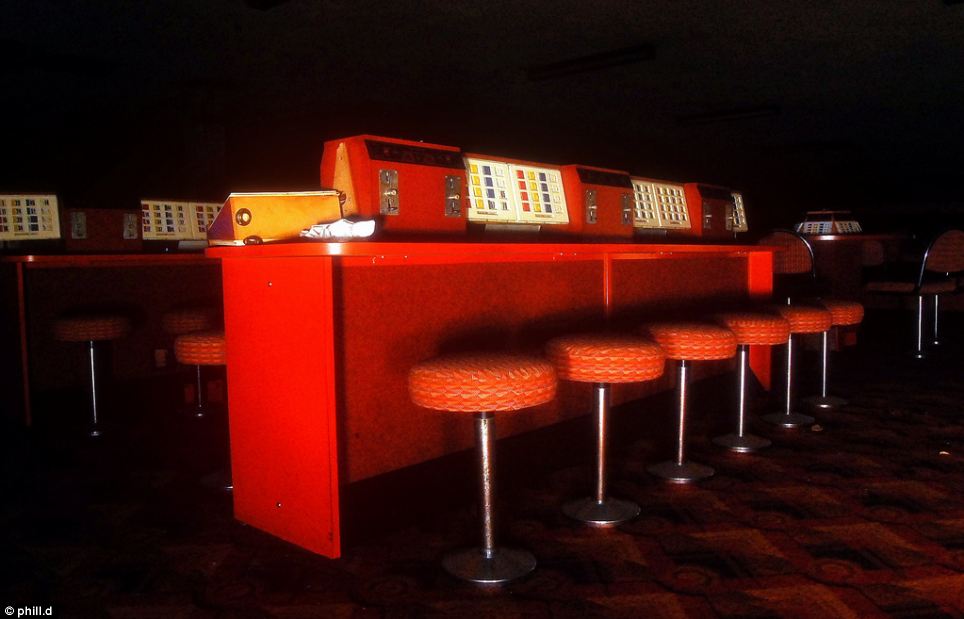 Eerie: The bingo hall inside the landmark building closed in 1997 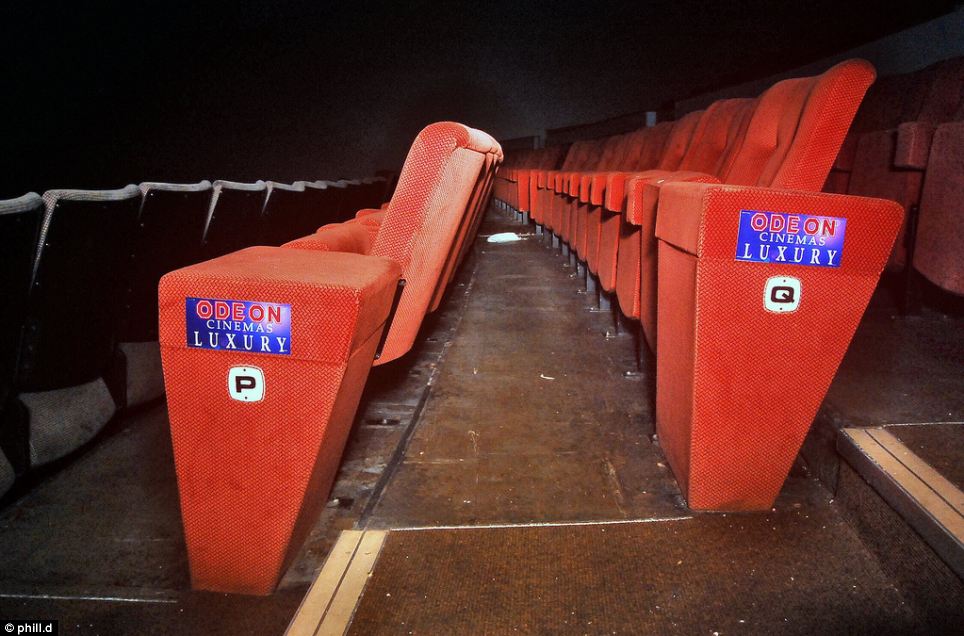 ‘Luxury’: Rows of empty seats inside the Bradford Odeon, which has been offered for sale to Bradford City Council for the sum of £1 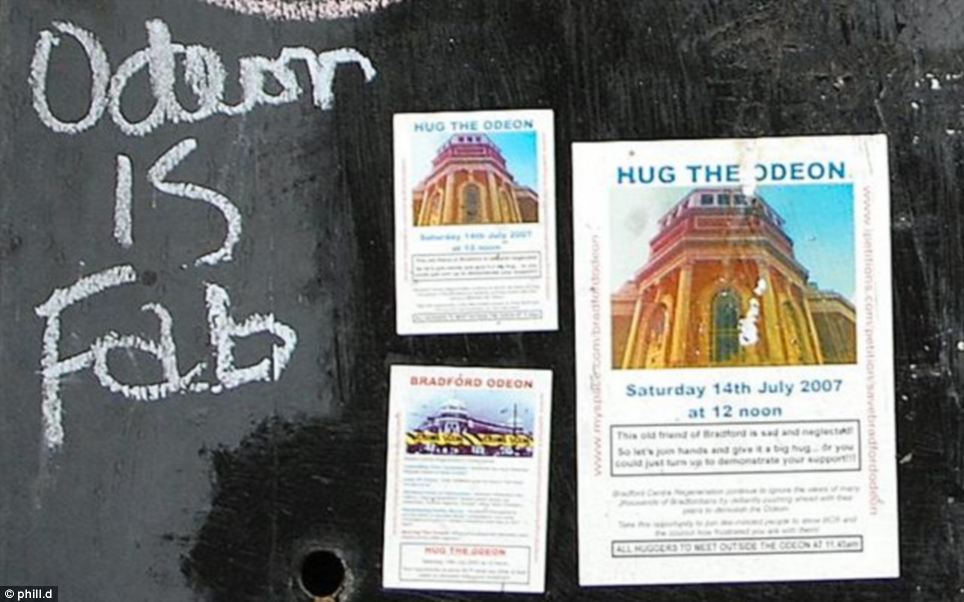 Campaign: The Bradford Odeon Rescue Group want to preserve the future of the landmark building 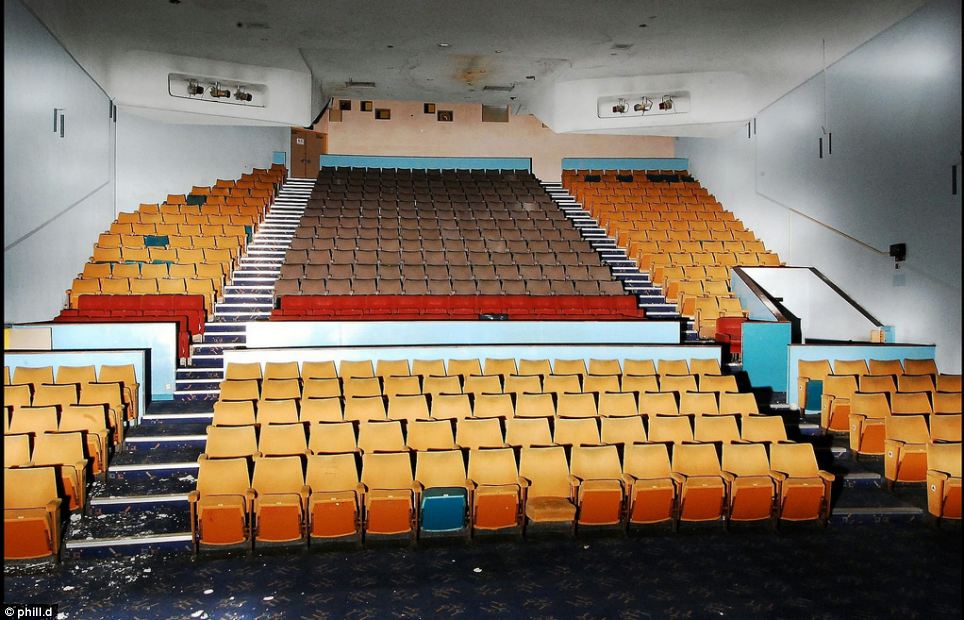 Past life: During the 1960s the Bradford venue – then known as The Gaumont – played host to The Beatles and The Rolling Stones